About The Cleanup DePue Campaign

In late 2011 the village of DePue, Illinois, working with Nancy Loeb of the Northwestern Law Bluhm Legal Clinic engaged Groundswell Educational Films, a non-profit documentary organization and Amdur Spitz & Associates, a public relations firm. Working as a team we are able to amplify the many voices of a village. We are building a public campaign to pressure ExxonMobil and CBS Viacom to fulfill their obligation to come back and clean up their toxic soil and water pollution in DePue.

Groundswell producer/director Jeff Spitz worked closely with residents to record their stories on video. Groundswell Media Producer Arlen Parsa developed the CleanUpDePue.org website. Groundswell collaborated with Dr Franz Geiger of the Northwestern University Chemistry Department to create the contamination map that illustrates the 1,976 samples collected over decades by contractors for ExxonMobil and CBS Viacom – samples that document toxic soil and water pollution throughout the Village of DePue.

Under grants from the Institute for Sustainability and Energy at Northwestern (ISEN) and the Environmental Chemical Sciences Program of the National Science Foundation‘s Division of Chemistry, Northwestern University Chemistry student interns worked over six month to analyze, interpret, and enter the data that you see on the map.

The sample data, obtained from the IL EPA via the Freedom of Information Act, was created by the contractors hired by the responsible parties (ExxonMobil and CBS Viacom), and was digitized by Northwestern interns. This website was the product of more than six month’s work and was released to the public via this website on August 15, 2012.

This website was made possible with a grant from the Institute for Sustainability and Energy at Northwestern University (ISEN). 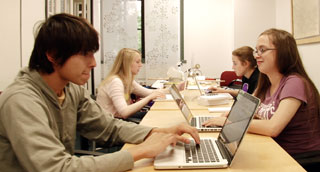 NU interns enter data from hundreds of pages of documents.